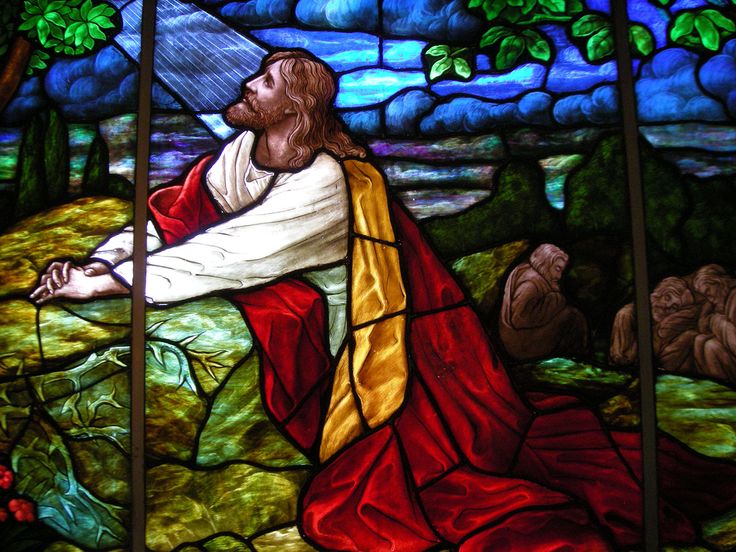 The Thursday of Holy Week was a massively important day! The breathtaking scene of the Lord Jesus humbling himself to wash the feet of his disciples; the institution of the Lord’s Supper; some of the most precious words spoken by Jesus in the last supper discourse (John 14-16); the most amazing and lengthy interaction between the Father and Son in Jesus’s high priestly prayer (John 17); Judas walking out on our Lord with greedy betrayal in his heart. All of this happened on Thursday – the day before the Christ’s death.

But there is also the scene in the Garden of Gethsemane. It is such a short account in the bible, but overflows with importance. Here we see the deepest agony anyone has ever known, the sweetest prayer, and triumphant love – such precious love.

After the last supper, Jesus and his disciples went to a place called Gethsemane. And taking just Peter, John, and James he went further to pray. What follows shows us the great cost of our redemption. Your salvation came at a great cost. Jesus knew what was coming, he knew what it would cost, and it was very daunting.

As Jesus considered what was coming in just a matter of hours, he was intensely troubled greatly sorrowful. Jesus said to the three disciples with him, “My soul is troubled, even to death” (Matthew 26:38). Troubled to the point of death? That’s intense. Luke’s account takes is even further:

And being in agony he prayed more earnestly; and his sweat became like great drops of blood falling down to the ground. ~ Luke 23:44

Jesus was in such agony; what he faced was so daunting that he was sweating drops of blood. It begs the question. Why the intense agony?

Many have rightly emphasized and unpacked the barbarity of the Roman form of execution by crucifixion. It caused maximum pain for a long duration. The physical pain that Jesus was to endure would be excruciating. Jesus knew this was coming. But that was not why he agonized to the point of sweating blood.

The humiliation and shame he would suffer would cut to the heart. Crucifixion was totally humiliating. The Old Testament Law states that a man hanged on a tree is cursed (Deuteronomy 21:22-23). It was utterly shameful. Hebrews 12 says that Jesus “endured the cross, despising the shame…” But, again that is not what made him agonize as he did.

Many before and since Christ’s crucifixion have been executed for their beliefs and endured it – seemingly with more composure and courage than Jesus. Accounts are told of Christians going to be burned at the stake or hung on a cross singing praises and exhorting onlookers to believe in Christ.

Again, why is Jesus under the weight of this agony? Jesus’s actual prayer to the Father points the way:

What caused Jesus such sorrow was “this cup” that he had to drink. Old Testament prophets and the book of Revelation connect a dreadful cup as being a cup full of the wrath of God (Isaiah 51:22, Jeremiah 25:15, Revelation 14:10, Revelation 16:19). This is what Jesus saw. The next day he would hang on a cross and bear the punishment for sin.

Your sin and my sin deserve punishment from a good, holy, and righteous God. God cannot and must not sweep sin under the rug. He cannot simply let bygones be bygones. So even though Jesus never sinned and you and I have sinned every day – he became sin for us. And because he became sin on our behalf, he also absorbed in himself the punishment for all our sins – past, present, and future. He took our place drinking every last drop of the cup of God’s wrath that we deserved. Now all we know is grace.

This is costly grace! This is unspeakable love! This is justice and mercy kissing on the cross!

In this is love, not that we loved God but that he loved us and sent his Son to be the propitiation for our sins. ~ 1 John 4:10

A verse from the old hymn “O Christ, What Burdens Bowed Thy Head!” sums it up well,

Death and curse were in our cup; O Christ, ‘twas full for Thee. But Thou hast drained the last dark drop, ‘tis empty now for me. That bitter cup, love drank it up; now blessings draught for me.

A Life of Faith

Is God Doing Anything Good in Your Pain?

You Need to Know the Holy Spirit - Part 1

The Dawning of Eternal Hope - An Advent Poem

Hope! God Is The Ruler Yet

A Prayer of Dedication For New Building

A House of Prayer

His Name Shall Be Called Prince of Peace

God's Final Category For You

Marriage According to the Bible

Set Up Your Sail

He is Greater, Our Treasure

Touching the Perfect One

Make Room For Joy This Christmas

A Halloween That Changed the World

A Now Word From God

What's So Good About Good Friday?

Those Forgiven Much, Love Much

The God Who Works For Us