Advent Is For Adoring Christ

The old Christmas hymn exhorts us, “O come let us adore him, Christ the Lord!” Advent is for adoring Christ. Not just thinking about him. Not just holding to certain doctrines or traditions, but joyfully adoring a Person - our Lord and Savior Jesus Christ.

The word Advent means arrival or coming. And Advent is the season leading up to Christmas where Christians celebrate the arrival of Jesus at his birth on the first Christmas. This is a glorious season, one full of gladness in the Savior and his redeeming work on our behalf. That certainly is how the biblical story is laid out for us. Joyful adoration is at the center of it.

Imagine being the Shepherds who had a host of angels put on a worship concert in a lonely field with just a few guys and their sheep. What happened? Well, after announcing the birth of Christ the Lord in Bethlehem, it says,

And suddenly, there was with the angel a multitude of the heavenly host praising God and saying, “Glory to God in the highest, and on earth peace among those with whom he is pleased.” (Luke 2:13-14)

Advent is for adoring Christ. And when the angels left, what did the shepherds do? They did NOT just go back to watching their sheep! They wasted no time getting to Bethlehem to see what the Lord had made known to them. And after they found Jesus and relayed all the angel had told them to Mary and Joseph it says, “They returned, glorifying and praising God for all that they had heard and seen.” Advent is for adoring Christ.

And then there’s old Simeon who was waiting for the “consolation of Israel”, and it had been revealed to him that he would not die until he had seen this consolation, the Messiah himself. When Joseph and Mary brought baby Jesus into the temple to present him to the Lord as the law prescribed, Simeon took the child in his arms and blessed God saying, “my eyes have seen your salvation…” (Luke 2:30).

Advent is for adoring Christ. And we cannot forget about the wise men. Or more accurately the magi. Magicians from the east, who traveled hundreds of miles because they had seen the star of the King of the Jews. They wanted to see this king who had been born? What were they coming to do? Worship. And when the star rested over the place where the child was it says, “They rejoiced exceedingly, with great joy”. That was just when they saw the house. What happened when they entered the house and saw the child? Stunningly, they fell down and worshiped him. Grown men. Sophisticated, wealthy men fell down and worshiped a young child. And they poured out their treasures, for they had found the true treasure they sought.

Advent is for adoring Christ. It is not merely for thinking about Christ or repeating the oft’ repeated mantra that Jesus is the reason for the season. Of course He is! But so much more!

Let this Advent season be one of deep, glad, large-hearted, and full throated adoration of the Lord Jesus Christ - the One who came to glorify God in the highest and to bring peace to restless hearts. The One who came to bring fullness of salvation and fullness of joy. The One who, if we have Him, we have a Treasure greater than all the gold and silver in the world; a Treasure that will never lose its value. And let this joyful adoration in Christ spill over into everything else. For he has come to make his blessings flow as far as the curse is found! O come let us adore him, Christ the Lord. 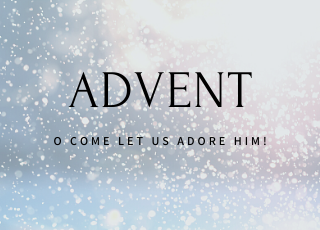