Mothers and Grandmothers, I want you to be deeply encouraged as we honor your calling to be a mother/grandmother and I also want you to be deeply challenged to embrace this calling with all your heart and excel in God’s power! We have women who have struggled getting pregnant or are unable to get pregnant in this church. And they have adopted children. I am talking to you every bit as much as I am biological mothers today!

THE CALL OF MOTHERHOOD

John Piper said of his mother, “What I owe to my mother for my soul and my love to Christ and my role as husband and father and pastor is incalculable.” Being a mother is not a second class calling. No, it is a first-class calling for which you have been tailor made! It is not job for losers. No, it is an all-important job for which the hand of Almighty God has designed you. It is not an entry level role in God's Kingdom (something from which you graduate). No, it is key role! It is not a hobby. No, it is a privilege of the highest degree with responsibilities – 24/7/365.

But our culture tells mothers there are more important things to do. Women need to spread your wings a bit. Pouring themselves into their kids might keep women from really living and getting out and experiencing life in the world! What is this communicating? “In your calling as mother, you are having little influence and effect. You could and should spend your time doing more important things.” That's wrong! It is a lie, and I urge you to reject it with all your being! As a whole, mothers may be the most influential people in the world. You think about this. The time mothers spend with their kids, teaching, feeding, nurturing, caring for, giving rides, getting up with in the night, reading, praying, sharing, singing, and teaching household chores is invaluable. The value of these things are immense! John MacArthur said, “To be a mother is by no means second class. Men may have the authority in the home, but women have the influence. The mother, more than the father, is the one who molds and shapes those little lives from day one.”

Mothers, you have incredible, enormous influence on your kids; and you should be deeply encouraged. But as you know, being a mother is hard! Embrace the biblical call of motherhood. Since abortion was written into law in our country in 1973, our society has decreed where children rank – last! If they are an inconvenience, they can be discarded. In God’s view, children rank above vacations and money, above fitness and fashion, above hobbies and careers, above convenience and comfort. You might be thinking, “If that is true, then to be a mother means I need to give up my life!” That’s exactly right. One time Alissa was slightly lamenting how the kids ALWAYS want what is on her plate… And what came out was more of a reflex that anything else. In fact, it almost seemed like it was put in my mouth. I said, “Because mothers are so much like Jesus. They want to be with you, they want what is on your plate, they want what you have.” But it is giving up your life!

Listen to what Rachel Jankovic said,

Mothers, only when at the foot of the cross, you die with Christ… and choose daily to die with Christ, will you find the resurrection life, strength, and grace to embrace and love the biblical vision and calling of motherhood.

MOTHERHOOD IS HONORED WHEN MOTHERS ARE CELEBRATED

Verse 28 says, “Her children rise up and call her blessed…” This is an amazing picture. The word blessed is like a spiritual high five. When the children rise up and call mom blessed, it is like saying, “You are amazing mom! Hurray for MOM! You are the best!” Picture this. Mom just makes an amazing meal. And in unison, the kids push their chairs back, stand up and say, “Hurray for Mom! You are the best. That was amazing! God is so good to give us a blessing like you!” But kids don’t do that. Of course they don’t. Kids do not naturally do this. But it can be learned. Where do the kids get this? Well, they get it from their dads. Dads set the tone in the home of honor for mom. You thought this was just a message about moms, didn’t you?

Her husband also, and he praises her: “Many women have done excellently, but you surpass them all.”

To praise here means to boast about! Men, you set the tone! Is your wife celebrated and praised and blessed in your home? Men, are your kids allowed to treat their mother like garbage? Are they allowed to speak to her like the family dog… that isn’t much liked? Then that is the tone you are setting by your passivity. And your wife is dishonored; and God is even more. Men, are you publicly boasting about your wife? How you love her and what a blessing she is? You are setting the tone either positively or negatively.

How should you praise your wife, the mother of your children? If you can’t think of a way, it is on you to get with God and ask him to help you see your wife the way he sees her – as washed by the blood of Jesus and beloved in his sight. This is a gospel issue. Because men, we are called to love our wives as Christ loved the church and gave himself up for her.  He initiated. And so must we. Let’s grow. Ray Ortlund, in his commentary on these verses says to husbands, “God wants to see your wife become more and more capable because of you. And he wants to hear you and your kids cheering her on all the way.” So men, set the tone both in how you lead this chorus of boasting about mom and what you prohibit from being said. Honor the mother of your kids; set the tone. The kids will follow your lead.

MOTHERHOOD IS HONORED WHEN MOTHERS SEEK MAXIMUM, GOD-GLORIFYING INFLUENCE ON THEIR KIDS

I say "God-glorifying" influence because you WILL have massive influence in their lives. And I want you to aim at and seek to have the kind of influence that will leave the mark of God on them. It is not just your kids you are affecting, but countless others through their lives. Charles Spurgeon – “I cannot tell you what I owe to the solemn word of my good mother.” Think of the thousands, even millions affected by Spurgeon! Praise God for his mom!

But how do moms have maximum, God glorifying influence on your kids? To unpack this, I want to take a woman in the bible that we know very little about actually. But we know enough to say that she was a remarkable woman. Have you ever heard of the woman in the bible named Eunice? Her son's name was Timothy. Timothy, the one to whom the letters 1 and 2 Timothy were written by the Apostle Paul. Timothy was a young pastor, a man who Paul considered a spiritual son. Timothy was a fellow missionary specifically chosen by Paul to travel with him. Timothy was a faithful follower of Christ even to his own death at the hands of persecutors. And who, from his youngest years had such prominent influence in Timothy's life? His mother, Eunice.

In fact, it is clear that Timothy received his spiritual heritage from prominent two prominent female figures, namely his Grandmother and Mother. His dad was not a believer. So if you are a single mom... or dad is not leading as he should, take courage from Eunice - Timothy's mother. That's not too big of a mountain for God.

So let’s look at two ways that Eunice impacted Timothy and I want to state them as exhortations to you mothers:

I am reminded of your sincere faith, a faith that dwelt first in your grandmother Lois and your mother Eunice and now, I am sure, dwells in your as well. ~ Timothy 1:5

Sincere means without hypocrisy, unfeigned, undisguised, genuine, or real. Paul says in Romans 12:9, "let love be genuine" - same word (genuine and sincere). The English word sincere comes from two Latin words: sine (without) and cera (wax). In the ancient world, dishonest merchants would use wax to hide defects so they could sell the pottery at a higher price. More honest merchants would place a sign over their pottery reading sine cera (without wax) so customers would know the pottery was genuine.

So mothers, don't fake it. Otherwise you are just teaching your kids that is what Christians do... and they will be little hypocrites who grow up to be adult hypocrites if you don't show them the real thing. Don't put wax over your cracks, don't pretend you have no weaknesses. Then you obscure God’s grace too. What does a sincere faith look like then? This is a message in itself, but in a nutshell, it means keeping the cross central. Your kids need to see from you what it looks like to love Jesus imperfectly, be forgiven by his blood, how to repent and confess sins, how to work through difficulties, how to suffer, how to give thanks in all things and for all things.

The reason I say stay close to the cross is because the gospel frees us from needing to put wax over our faults. Addressing the church at Corinth, Paul said, "I determined to know nothing among you but Christ and him crucified." The cross of Jesus Christ is the fountainhead of all grace, so moms keep the cross central.

Mothers, teach your kids to love the bible. Timothy was exposed to the scriptures at a young age through his mother which later led to his salvation:

But as for you, continue in what you have learned and have firmly believed, knowing from whom you learned it and how from childhood you have been acquainted with the sacred writings, which are able to make you wise for salvation through faith in Jesus Christ. ~ Timothy 3:14-15

John Wesley said, ”I learned more about Christianity from my mother than all the theologians in England.” The same John Wesley who was so powerfully used in the Great Awakening and also said he was a man of one book. His mother taught him to love the book! A few years ago, the cover of TIME magazine asked the question “Are you mom enough?” You may be wondering that same thing, thinking, “It seems so hard and all I'm doing is fighting to keep my head above water.” I can't imagine a more demanding thing to do than be mother, but it's meant to be joy too!

Hudson Taylor encourages us with the words, “God’s work done in God’s way will never lack God’s supply.” Today, through Christ, God is extending mercy for all your mistakes, grace to take away all your guilt, love to cover a multitude of sins, and more than enough strength to fulfill your calling as mother! 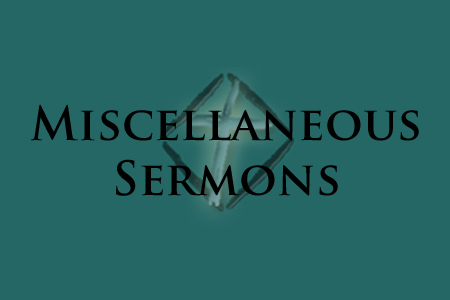 The God of Peace