A Dwelling Place For God

We are starting a new teaching series. This morning what I want to do is give a brief overview of the journey we will be taking and some of the landmarks we are going to visit on the way.

Francis Chan echoes this sentiment when he says,

There is a big gap between what we read in Scripture about the Holy Spirit and how most believers and churches operate today… If I were Satan and my ultimate goal was to thwart God’s kingdom and purposes, one of my main strategies would be to get churchgoers to ignore the Holy Spirit.

Jesus put the coming of the Holy Spirit front and center on the eve of his death – pressing the fact that the Spirit’s coming was imperative for the continuing of his purposes on the earth. So the overarching series is called “The Spirit-filled Church”. We want to spend time looking at marks of a church led by and filled with the Spirit. There are five marks we are going to look at – and we’ll spend 3-4 weeks on each one to look at them in more detail.  We want to look at how the Spirit energizes and empowers:

As we work through this series, we are going to be stretched. We are going to be challenged. It may even be painful – I know it has been for me as I have been before God in prayer and study. But the Olympian Champion doesn’t become an Olympian, let alone a champion by sitting on the couch during training season. No, they overcome obstacles and endure the pain of training in order to win the prize. And all this they do this for a temporary medal; one that will decay or rust. Paul says, however, Christians are running for an eternal medal – a prize that will never perish. How much more should we be willing to overcome obstacles and endure the pain of God’s training program to become all He wants us to be – and win the prize?

This will be a series that describes not so much what we currently are, but what we want to be and by God’s grace what we become more and more over the next weeks and months. My prayer is that from week to week, people will have powerful encounters with God; fresh infillings of his Spirit, and set on fire like never before. I think of Galatians 3:5 (encourage to hear with faith).

The Church as a Dwelling Place For God

Last week’s message on unity and this week’s text help point our way forward – both serve by way of introduction. So in the time we have left, I want to briefly look at Ephesians 2:22. Let’s read it again, and dig into it for a while.

In Him you also are being built together into a dwelling place for God by the Spirit. ~ Ephesians 2:22

Here’s the BIG IDEA: The Church is a spiritual house where God lives.

The church is God’s house on planet earth. Not a physical building, but Christians gathered together. Therefore we must see ourselves as a spiritual house where God lives and we must be people of God’s presence. People who gather to God and his presence when we are together. I want you to see 3 things as we unpack this big idea:

First, all three Persons of the Trinity are working in cooperation in the building of this spiritual house. Second, this is in fulfillment of God’s promise. Third, this is an ongoing construction project.

All three Persons of the Trinity are working in cooperation

So Christians believe in the truth that God is Triune. In other words, there is one God and three co-equal, co-eternal Persons. God the Father, Son, and Holy Spirit. The Father is not the Son, nor the Spirit. They are distinct Persons, yet one God. And we see all three Persons in cooperation building this dwelling place for Him to dwell.

Notice first, the phrase, “In Him” namely in Christ. We see that Jesus is in view here from the preceding verses (verses 20-21). One of Paul’s favorite ways to describe a Christian is a man or woman “in Christ”. We at one time were “in Adam” as a part of the human race. And because we were in Adam, we had a sin nature and were under the curse and had a death sentence. But when we got saved, we were taken out of Adam and placed in Christ and all of a sudden we are righteous in Christ, given eternal life in Christ, and (in view here) joined to the church. You have been given life and privilege of being joined to the spiritual house where God lives as a gift of God’s grace through Christ.

Look next at the fact that we are “dwelling place for God”. Our omnipotent, omniscient, omnipresent Father God dwells is here. The final destination of the gospel is the Father. Jesus says, “no one comes to the Father except by me.” But here we see, the Father makes his home with us.

Then finally, we see how. The Father makes his home with us by the Spirit or by agency of the Spirit. So when Jesus talks about “coming” to his disciples or the “Father and Son making” their abode in the one who loves and follows the words of Jesus, he means by the Holy Spirit (John 14:18-23).

So, the church is spiritual house where God lives and all three Persons of the Trinity are working in cooperation.

This is a fulfillment of God’s promise

It has always been God’s agenda to dwell with his people. But all that was lost in the garden when Adam sinned. The most catastrophic thing happened. God’s image bearers were banished from his presence. Adam and Eve were driven from the garden and every human being born since then has been born alienated from God. We see God’s intention to dwell with his people restored partially in the building of the tabernacle in the wilderness. God gave Moses exact instructions. He took up an offering of the materials to build the tabernacle and it was constructed. And listen to what happens once it was set up:

Wow, even Moses couldn’t enter. The presence of God was so strong. But this was just a temporary tent. We see a further development in the dwelling of God with and among his people in the building of the temple by Solomon in 1 Kings 8, once the temple was complete, the priests brought the ark of the covenant into the holy place and listen to what happened:

But we see even a further development. At the beginning of the book of John, we hear these wonderful words:

These words, of course, refer to Jesus, the eternal Son of God. Several verses later, John says, “And the Word became flesh and dwelt among us, and we have seen his glory, glory as of the only Son from the Father, full of grace and truth” (John 1:14). The Word became flesh – referring to the incarnation of God in Christ. The words “he dwelt” literally mean, “He spread his tabernacle.” God was walking the earth, dwelling among his people.

But even Jesus, in preparation of his departure, turned the attention of his disciples to the coming of the Spirit. He said, “You know him, for he dwells with you and will be in you” (John 14:17). And then the day of Pentecost and was marked by an enormous, world changing event – the Holy Spirit of God was poured out; unleashed upon the world and ever since, the gathered church has been the special place of God’s dwelling.

Paul claims plainly in 2 Corinthians 6:16 says it is in fulfillment of what God had spoken previously:

For we are the temple of the living God; as God said, “I will make my dwelling among them and walk among them, and I will be their God, and they shall be my people.

So when Paul says in Ephesians 2:22 that the church is the dwelling place of God, he knows this is fulfilling God’s promise.

Gordon Fee in his book “God’s Empowering Presence” said, “It is God’s own presence among us that marks us off as the people of God and, in the language of Moses, is ‘what distinguishes us from all the other people on the face of the earth.’”

This is an ongoing building project

you also are being built together…

What if this is not our experience?

Until now, all I have said has been descriptive – describing what God does. What if this is not our experience? The NT seems to indicate this can all be true and the very people to whom these things are true be unaware of it and therefore unresponsive and unbelieving in regards to the truth.

This is the supreme need of the Church today. In one way, the main trouble with the Christian church as she is at this moment, the main trouble with every of us in our daily life and living, is that we fail to realize that the living God is among us. What is the church? It is this institution, this body in which God dwells. He has promised that, ‘I will be in you. I will dwell in you. I will walk among you.’ That is what he said to the children of Israel and that is what is transferred exactly the same way to the Christian Church. The church is not a human organization and institution. She is as the Apostle Paul puts it… a great building in which God dwells, a habitation of God.

Paul seems to assume this need too in the Corinthian Church. He asks the rhetorical question, once of individuals and once of the corporate church.

Do you not know that you are God’s temple and that God’s Spirit dwells in you? ~ 1 Corinthians 3:16

Do you not know that your body is a temple of the Holy Spirit within you, whom you have received from God? You are not your own… ~ 1 Corinthians 6:19

And do not get drunk with wine, for that is debauchery, but be filled with the Spirit.

Be filled and keep being filled. Don’t think back at one time or a season when you seemed to be especially filled with the Spirit. Be filled. Today – seek to be filled. 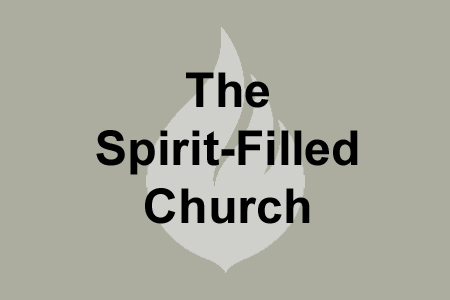 More in The Spirit Filled Church

Full of the Love of Christ

Filled With the Holy Spirit

Equipped By the Spirit