What God Requires He Gives

If I ask the question, “Are you righteous?” you may stumble around for the right answer.  Some might say, “Well I am trying.  I’m doing better than before.  It’s been a tough week.”  Some might boast, “Yes, of course!” Still others recoil at the idea because this is someone who doesn’t know how to have a good time and wants to make sure others don’t either.  We all want to avoid that kind of person.

This verse gets to the central theme of the book of Galatians.  And in the book of Galatians, Paul gets to the heart of the gospel which is justification by faith which is the teaching about how we are made righteous in God’s sight.  This teaching was the flashpoint of the Protestant Reformation which is why Martin Luther said of this truth, “It is the teaching upon with the church stands or falls, upon which you and I stand and fall.”  John Calvin said, “Justification by faith is the hinge upon which true religion turns.”

This truth answers the all-important question, “How do I get right with God?”  And helps us answer the question “Am I righteous?” in light of the gospel.  But oftentimes we aren’t nearly as concerned about what God thinks as what other people think.  20th century theologian J. Gresham Machen put it this way,

I spoke with someone this week who described his relationship with God as one of climbing a ladder.  And he said, “it seems like I climb up two rungs and God moves us three.”  In other words, he just wasn’t quite good enough.  Many, many people feel this way.  And there is a good reason for that.  This reveals our problem.  God is good and righteous.  And we, in ourselves are not.  Romans 3:10,12 says,

So, we have a righteousness deficit. Yet to be right with God, we need righteousness.  The good news of the gospel says that God requires, namely righteousness, He provides.  Let’s consider three things from this verse: 1) Jesus earned righteousness for us, 2) we don’t move beyond this gift, 3) the effects this truth produces in our lives.

Jesus earned righteousness for us through his death

If righteousness is through the law, then Christ died for no purpose.

So we cannot gain righteousness through lawkeeping.  John Bunyan is credited with writing a short poem that starts with: “Run John run, the law demands, but it gives us neither feet nor hands.”

So Paul directs us to a righteousness that doesn’t come by our efforts, but one that has been earned for us through the death of Jesus.  Now, we most often think of the death of Christ as the removal and pardon of our sins.  Yes indeed!  But what if the death of Jesus only took away our sins?  We would be innocent in a sense, but not righteous. The law has negative consequences for lawbreakers which Jesus paid when he died on the cross purchasing our pardon.  But the law also requires positive obedience to its commands and speaks blessing to those who keep it.

We haven’t kept it, but Jesus did perfectly.  There’s an interesting encounter in Matthew 3:15 - “Let it be so, for it is fitting for us to fulfill all righteousness.”  For the Jew what this meant was to obey every jot and tittle of the law.  Now Jesus was not acting in his baptism for himself but for his people.  If his people are required to keep the 10 commandments, he keeps them.  If his people are required to be baptized by John, he is baptized by John on their behalf.  Christ’s redemptive work included his death on the cross, but also his perfect life of obedience.  God did not just send Jesus on good Friday in order to die for our sins.  No, Jesus not only had to die for our sins, but he also had to live for our righteousness.  And the perfect obedience of Jesus found its climax on the cross (Philippians 2:8).  So through faith in Christ, he becomes our pardon and perfection.  Our forgiveness and our righteousness.  If Jesus had just died for our sins, we would be sinless in the sight of God, but not righteous.

So there was a double transaction which took place on the cross which John Bunyan put so well:

This is precisely what 2 Corinthians 5:21 says,

For our sake he made him to be sin who knew no sin, so that in him we might become the righteousness of God.

And when you received this amazing gift through faith in Jesus Christ alone, how can you not respond like Isaiah in Isaiah 61:10 says, “I will greatly rejoice in the LORD.  My soul shall exult in God, for he has clothed me with the garments of salvation, he has covered me with the robes of righteousness.”  Jesus has earned this for us!

We don’t ever move beyond this gift

I do not nullify the grace of God

To nullify means to cancel out or reject or set aside or to make void.  When you void a check out, that check is of no monetary value.  You cannot use it to pay a bill or purchase groceries.  Paul says “I do not void out the grace of God by attempting to gain righteousness through the law”.  Later in the book of Galatians Paul has strong words for those who accepted circumcision (the actual operation) as a means of acceptance with God,

I say to you that if you accept circumcision, Christ will be of no advantage (value) to you.  I say again, to every man who accepts circumcision that he is obligated to keep the whole law.  You are severed from Christ, you who would be justified by the law, you have fallen away from grace. (Galatians 5:2-4)

Those are strong words.  But this week noticed something here in verse 21 that I hadn’t before.  It was always there and certainly would have agreed with it if someone told me, but it jumped out and grabbed me.  But here Paul says, “I!”   He does not say, “You better not nullify the grace of God.”  This is Paul - the eminent apostle to the Gentiles!  He is the one who had the “road to Damascus” experience!  He was the original man who was “knocked off his high horse”.  He was taken to the third heaven and saw things that are unutterable!  And he never jettisoned this gift of righteousness.  He never thought he moved beyond it.  He consciously remained righteous in God’s sight through Jesus Christ alone!  In 1 Corinthians 15 Paul says, “I am what I am by the grace of God…”

Yeah, but Galatians and 1 Corinthians were written earlier in Paul’s ministry.  Perhaps he graduated later on and was able to add some of his obedient works to gain extra credit with God.  Philippians 3, which was written ten years later says quite the opposite.

For [Christ’s] sake I have suffered the loss of all things and count them as rubbish, in order that I may gain Christ and be found in him, not having a righteousness of my own that comes from the law, but that which comes through faith in Christ, the righteousness from God that depends on faith. (Philippians 3:8-9)

The gospel of God’s grace by which he counts us righteous in Christ is good news the first day we believe and is no less good news (perhaps experienced even more) near the end of our life.  I love the way John Piper puts it, “We don’t respond to the gospel once and then move on. We need it every single day. Jesus’s life, death, and resurrection is good news for both weary sinners and seasoned saints.” Beloved, we do not move beyond grace!

What are some of the wonderful effects of this gracious gift of righteousness?

Not just when you know this in your brains, but “when it gets into your bloodstream”.  That is the goal of our study of of Galatians.  Tim Keller said “revival occurs when those who think they already know the gospel discover they do not fully know it”.  When it goes deeper into the bloodstream.  What are some of these effects?  We could go all day, but I’ll give three.

Blessed is the one whose transgression is forgiven, whose sin is covered. Blessed is the man against whom the LORD counts no iniquity.

It has made the saints sing for centuries.  When Heaven Came Down: “Justified fully through Calvary’s blood, O what a standing is mine.  Now I’ve a hope that will surely endure after the passing of time.”  The opening line of On Christ the Solid Rock, “My hope is built on nothing less than Jesus blood and righteousness.” The closing verse, “When he shall come with trumpet sound, O may I then in him be found.  Dressed in his righteousness alone, faultless to stand before the throne.”

And Can It Be: No condemnation now I dread, Jesus and all in him is mine.  Alive in him my living head and clothed in righteousness divine.  Before the Throne: Behold him there the risen lamb.  My perfect spotless righteousness.  A contemporary song, Lord I Need You: You’re my one defense, my righteousness. O God how I need you.  When this truth gets in you, you will sing.  You may not be able to carry a tune still, but you will sing!

You will have an unshakeable foundation of assurance.  Romans 8:33 asks and answers an important question, “Who shall bring a charge against God’s elect?  God is the one who justifies!”  Our crimes against God have already been charged against Jesus and paid for.  We have been pronounced righteous forever.  JI Packer said, “Justification is decisive for eternity, being in effect the judgment of the last day brought forward.”  What assurance!

Access to the presence of God. 1 Peter 3:18 says, “Christ suffered once for sins, the righteous for the unrighteous, that he might bring us to God.”  The righteous One took the place of the unrighteous to bring to God.  I don’t have to climb a ladder to God, I’ve been brought near.  And now I can freely come to God through Christ.  The greatest treasure of the gospel is God himself. 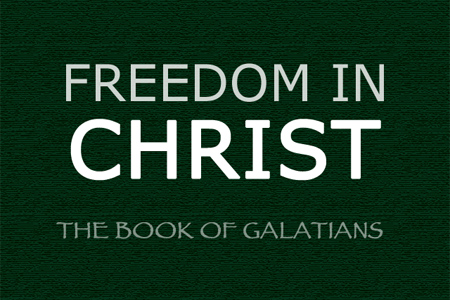 More in Freedom in Christ - The Book of Galatians

Boasting Only In the Cross

Do Not Grow Weary In Doing Good