We will be resuming public, corporate worship at Real Life Church this Sunday, May 10 for all who are comfortable and want to join us.  Please watch this VIDEO outlining steps we are taking for your safety and guidelines we ask you to follow if you join us on site. We will also continue to live stream our worship service weekly on the RLC Facebook Page. 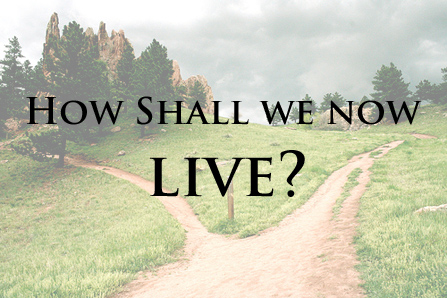 What is marriage? Is it a social construct developed over time for the furthering of our species and therefore subject to our molding and shaping and redefining? Paul tells us what it is. In verse 31 he says, "Therefore a man shall leave his father and mother and hold fast to his wife, and the two shall become one flesh."

At a time when confusion abounds in our culture surrounding sexuality, and society tells us that the meaning of marriage and even one's gender is malleable, we need a dose of sanity. Isaiah 40:8 says, "the grass withers, the flower fades, but the word of our God will stand forever." The audacious Supreme Court ruling cast aside ancient and divine wisdom for a new and novel idea concerning marriage. Just as the grass withers, one day this Supreme Court ruling along with the judges themselves will wither, but God's word will remain. If God, by his word, has engineered marriage, we have no business re-engineering it. Therefore God's word will always be relevant. God has spoken and still speaks about marriage, has definitively assigned a definition to it, and he doesn't need our help in coming up with more creative arrangements.

Hebrews 13:4 says, "Marriage is to be held in honor among all."  "Held in honor" means esteemed, especially dear, something of great price, precious, or very costly. In our society, marriage is fairly common (explain), but it must be brought back to a place of esteem among us... among all!

There are a couple groups of people I want to talk to just for a minute before we go further:

First, there are some here not married. Don't snooze through these next two weeks or decide to sleep in. The man who wrote Ephesians 5, which is perhaps the most important text on marriage in all the bible was not a married man (Paul). You, even though not married, can play an important role in honoring and strengthening marriages even while single. And you are honored here.

There are some here in the middle of a tough marriage – and maybe you feel like you are the only one trying. First, now is not the time to give up! God wants to refresh you with a renewed vision of the glory and beauty of marriage to strengthen you for the road ahead. And he wants to use you to BE the miracle your marriage needs for a breakthrough.

The most foundational passages in the bible on marriage are found in the first pages of scripture - Genesis 1 and 2. Here we see God’s marital pattern for all of human history. We know this is God's creative design for all time for two reasons: 1) This is spoken before sin entered into the world, so it is not God's plan B once Adam and Eve blow it. 2) Jesus and Paul both appeal to Genesis 1-2 in their seminal teachings on marriage in Matthew 19 (and Mark 10) and Ephesians 5. So we know that God hasn't since changed his mind.

In the first pages of the bible, here is what we see:

27 So God created man in his own image, in the image of God he created him; male and female he created them. 28 And God blessed them. And God said to them, "Be fruitful and multiply and fill the earth and subdue it and have dominion over the fish of the sea and over the birds of the heavens and over every living thing that moves on the earth."

Then after God had taken a rib out of Adam to create Eve, God presented the woman to the man.

23 Then the man said, "This at last is bone of my bones and flesh of my flesh; she shall be called Woman, because she was taken out of Man." 24 Therefore a man shall leave his father and his mother and hold fast to his wife, and they shall become one flesh.

It is worth noting that after each stage of creation, God looked at what he made and saw that, “it was good.” However, after creating man and woman in his own image, God saw what he made and it was very good (Genesis 1:31).

So, things were good on days one through five, but not yet very good. Once man and woman were added to the mix, all that he had made was very good. What made marriage very good? Six things:

1. Marriage is a covenantal union

Covenant means a contract or a pledge or guarantee or promise.  In Genesis 2:22, God presents Eve to Adam., after which Adam responds, and then we hear the words often uttered at a wedding, “Therefore a man shall leave his father and mother and be joined to his wife, and they shall become one flesh.” These are profound words and these are radical words. The ties of a man to the prior generations of his family were strong. But the marriage covenant requires a man to leave his parents in order to form a more intimate and stronger union. These are words of covenant and commitment. And God does not take our marriage commitments lightly. Jesus, after quoting Genesis 2:24, adds the words, “What therefore God has brought together, let not man separate.” (Matthew 19:6). God brings a man and woman together and once we enter into this marriage covenant, we have no right to break it. We live in a day of commitment-phobia! I remember hearing a story about someone who was at a wedding where the vows were uttered, "So long as love shall last." The person telling the story said he thought of a gift perfectly fitted for this new couple - a box of paper plates. Marriage is a covenantal union before God between one man and one woman. This is to be honored.

2. Marriage is two becoming one

Marriage unites two people in such a fashion that they become one. Genesis 2:24 says, "they shall become one flesh." God takes two selfish “me’s” and brings them together into one unified “us”. This means, there is now one life, one reputation, on bed, one budget, one family, one trial, and one mission. This mingling of two becoming one is consummated in sexual intimacy between the husband and a wife. Paul, exhorting the people of Corinth to run away from sexual immortality says, Or do you not know that he who is joined to a prostitute becomes one body with her? For, as it is written, “The two shall become one flesh.” (1 Corinthians 6:16) THIS IS TO BE HONORED.

3. Marriage is for pro-creating and raising future generations

The first command given to Adam and Eve was, “Be fruitful and multiply, fill the earth” (Genesis 1:28). The command, “Be fruitful and multiply” means, have babies. Of course, there are circumstances where a husband and wife are unable to have children. ADDRESS THOSE WHO CANNOT HAVE CHILDREN... The clear implication in the bible however, is that one of God’s purposes for marriage is procreation. Albert Mohler says one of the things that has led to our present sexual revolution is the idea that sex is totally unhinged from having babies.

Furthermore, procreation logically leads to mothering and fathering children. Children need a mom and dad who are committed to each other in marriage as well as them. Author Maggie Gallagher bluntly stated, “sex makes babies, society needs babies, and babies need a father as well as a mother.” THIS IS TO BE HONORED.

4. Marriage is a complementary relationship

Another way to put this is that marriage is a heterosexual union. Adam was alone in the garden naming animals and working the ground when God said, “It is not good that man should be alone; I will make a helper fit for him” (Genesis 2:18). The words "fit for" mean corresponding to, or suited die, or "a perfect match!" Apparently in God’s mind, a woman was the perfect helper for Adam; perfectly fit or suited for him. So marriage is complementary and heterosexual. Hetero means different, homo means the same. God designed the different but complementary to be joined together in marriage. Ray Ortlund says, "God prefers unity in variety." He chose to bring two unlikes together to complement each other and create something beautiful. THIS IS TO BE HONORED.

Marriage is an exclusive relationship or monogamous relationship between two people. God brought Adam one woman, signaling God’s pattern and God’s desire for a single and exclusive union between one man and one woman with the words, “they shall become one flesh.” Paul, here in Ephesians 5 gets even more specific when he says, “the two shall become one flesh.” In other words the “they” in Genesis 2:24 does not mean three or four people (or more), but two. The bible gives many examples of men with several wives, but Paul clearly rejects that! Paul narrows the exclusivity of marriage to one man and one woman for life. Paul is not correcting Genesis, but merely further clarifying it. Jesus does the same in Matthew 19.

Marriage is truly a gift to creation, but it ultimately points to an infinitely more glorious reality. Paul shows us this in Ephesians 5:30-32:

30 we are members of his body. 31 “Therefore a man shall leave his father and mother and hold fast to his wife, and the two shall become one flesh.” 32 This mystery is profound, and I am saying that it refers to Christ and the church.

God’s highest intention in marriage is that it would be a living drama of the intimacy and unity of Christ and the church. A man and woman coming together in a covenantal commitment is emblematic of the sacrificial love of Christ for his bride, the church and the respect, submission, and admiration of the church for her Bridegroom, Jesus Christ.

So earlier in Ephesians 5 when Paul says, “Wives, submit to your husbands as to the Lord” and “Husbands, love your wives, as Christ loved the church and gave himself up for her” he is pointing to God’s path for joy and flourishing within a marriage for sure. More importantly, he is showing us how marriage is meant to be a sign pointing to something bigger, namely the union of Christ and the church. So your marriage is means to tell the gospel story.

Much more could be said, but let’s end with this:

Marriage is to be held in honor among all and let the marriage bed be undefiled, for God will judge the sexually immoral and adulterous.

1. If God has so defined marriage, there can be no legitimate redefinition AND any attempt to redefine what God has already defined must be rejected.

2. Seek with all of God's strength to highly esteem marriage in all your thoughts and in your actions.

3. Celebrate the God who has given this amazing gift.

More in How Then Shall We Live?

Love for the Lord Jesus Christ

Take Up The Helmet of Salvation

Take Up The Shield of Faith